Spiffy and Sweets had time to kill, so the two decided to explore another multi-use area that caught their eye about month ago in which they often pass whenever heading to camp up in the mountains. Perhaps this could be another place for us to stay she thought to herself. It’s 20 minutes closer to town but still a good hour away; every little bit counts when saving on time and gas though, right? The drive was a straight shot from where we were coming from. We veered to the right, turning off the highway onto a narrow dirt road. We were surprised our car was able to handle such a road as bumpy as it was; potholes left and right. For whatever reason, our exhaust tends to hang super low, barely leaving much leeway from the ground. Seriously though, I don’t know how our car took such a beating without damaging any parts. The sun hidden behind the clouds; trees draped over the pathway, giving a whimsical feel. Oh and the birds, chirping on the top of their lungs creating a symphony.

There was a designated parking area for the common backpackers and bicyclists but with so much to see ahead, we chose to continue driving along to avoid having to do a strenuous walk. Yes I know, it was a bit lazy of us to do but hey, we were giving our legs a rest for once. Moving along, Spiffy saw some appealing areas to his left on the driver side that potentially made for some good camping; cleared out bald grounds. A little further up, there were a couple more spots. I was busy just taking it all in, it was that pretty. What we were about to stumble upon could only be described as astonishing. There it was, to our left, an old rustic chimney made of brick. 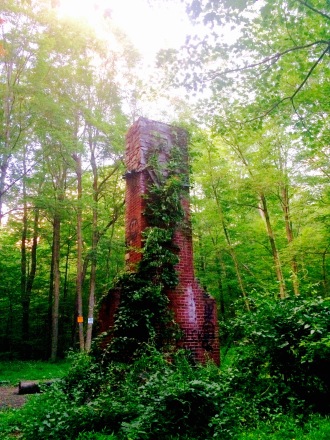 How it was still standing, that I could not tell. The structure was unbelievable, gigantic in fact. You could tell that it served as an indoor fireplace of someone’s home in some point in time, at least a couple of decades. We quickly got out of the car and sprinted towards the chimney. “Oh, my, goodness! Would you look at that?” Sweets said as she shrieked in utter amazement. “This is quite something.” Spiffy replied as his gaze turned to Sweets. She didn’t think twice before getting in the cameras view, grazing her fingered against the brick. Spiffy stepped closer and snapped away incorporating sweets in on some of his photo taking. Right before us, the sun had set.It was time to get a move on things and head to camp for the night.

It must have been the midnight hour when Spiffy got startled out of his sleep. He heard running, circling our tent. He could tell it was large. Spiffy stayed calm and still yet while doing so, Sweets just so happened to wake up needing to go to the bathroom. Spiffy not wanting to scare Sweets, looked at her and said, “there was something close to the tent but is gone now.” When really, Spiffy had not a clue where it was roaming about. Still frightened on the inside, joined Sweets to make sure she was safe and in clear. Sweets, freaked out by what Spiffy had mentioned, barely got the tent’s zipper fully open before practically bolting inside; unsure of whether or not the animal was going to make another visit. Was that a pleasant way to be woken up or what?

I was so happy when the sun rose. Seeing daylight just gave me a sense of calmness and gratitude. Scrambling through our Thule box on top of our car with our belongings in it, we found what we needed to get going to the gym. We figured we’d go get a workout in along with a shower and possibly use their Wi-Fi for work. “What was that?!” Spiffy said aloud as we turned a sharp corner. A lunch box flew from the car soaring in the air onto the road behind us. Pulling over quickly, Spiffy quickly and safely jumped out of the car being sure to keep distance from the fast cars swarming by him only to see that our overhead Thule was wide open for everything to fly out of. 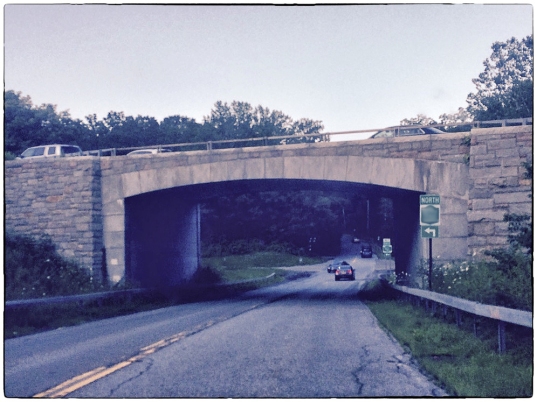 Talk about good fortune. We honestly could have lost every bit of what was in there, and trust me it was a ton of stuff; everything from tent equipment to clothes and electronics. Yeah, you could imagine the horror when we realized what we had done and what could have gone wrong. How could we have been so negligent? Anyways, He secured the overhead and off we went again.

Every new day that comes gracing me with morning’s presence, I feel thankful and blessed that I have woken up to yet another day; exactly how I felt this very morning. When things happen such as last night, where it gives you such a scare, it really makes you think and look at life differently.